Film One distributions and Viensa Productions have teamed up on a new film titled 1929 which is set to hit cinemas from April 2019.

The historic drama movie which has received positive response and engagements from cinema lovers and the press alike will be in cinemas nationwide from the 19th of April 2019. 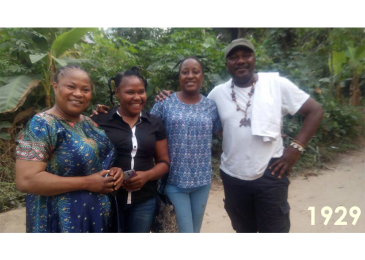 Based on the true life story of the historic travails and riot in then Eastern region of Nigeria in 1929, the movie showcases a combination of veterans; Sola Sobowale, Ireti Doyle, Sam Dede, others include Becky Odungide, Ndy Akan, Lois Ikpaha, Uduak Odungide, KedianaAbasi Kam, Emman Etukudo, Emmanuel Owuala, Nancy Bassey, Enobong Ekwere and many more.

The movie brings to light the true-life story of the Ikot Abasi, Opobo women unrest of 1929 that claimed the lives of many women protesters across the eastern part of Nigeria. The women; mostly traders and farmers, protested against the law that made it compulsory for all the women in the Opobo division to pay a percentage of their worth as taxes to the colonial government in the division. This protest against the law, escalated into a full blown violence that claimed many lives.

Speaking with the producer, Ndy Akan on the decision to make this film, she said; ‘Many people believe that the 1929 women’s riot took place only in Aba. This movie will help shed light on the fact that women from different provinces in the eastern region of Nigeria played a very important role to put a stop to the imposition of tax on women.

This is a film that will take you back in time and as such help you think, feel, laugh and learn. It will also serve as a point of reference for research and broaden people’s knowledge on the historical event of the year, 1929.’

Next Post #MondayMovieMadness: 10 Nollywood Movies Showing In Cinemas This Week!