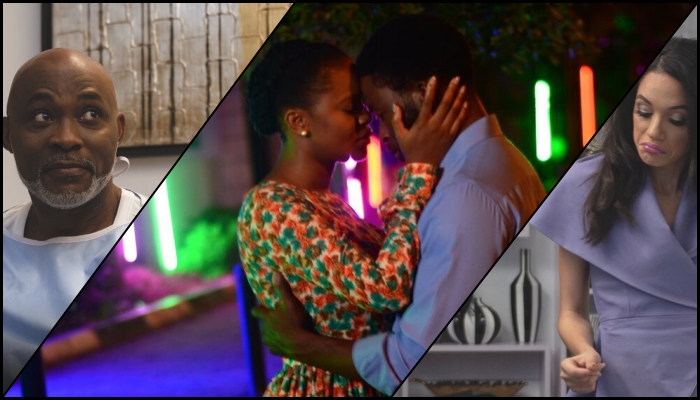 Film making is no easy feat in Nigeria, and while the Nigerian Film industry aka Nollywood churns out a number of movies, kudos should be extended to the writers, producers, directors and actors that are working diligently to change the narrative of how we view the film industry.

In this piece, Writer/Director BB Sasore and Producer Momo Spaine shed some light on the most highly anticipated movie this Christmas season ‘God Calling’. The movie is an inspirational film about purpose and hope, and has a stellar cast with some of the biggest names in the industry. 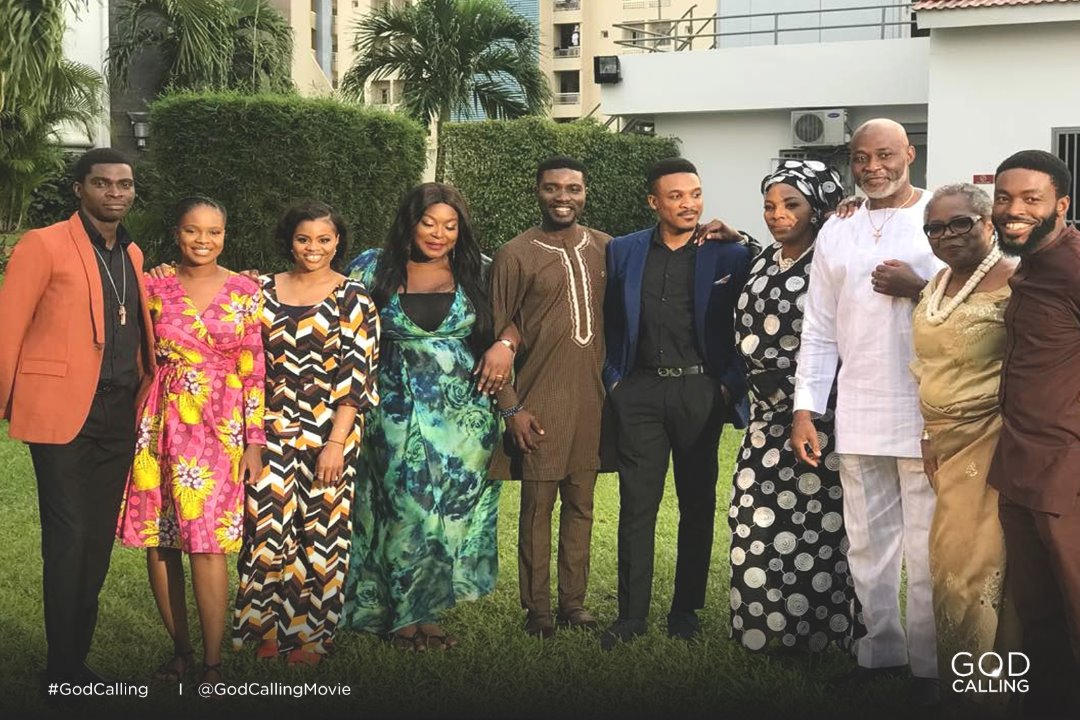 What influenced the production of a purely faith-based movie?

BB SASORE: At Nemsia Films we decided that the faith-based genre was one we wanted to work in as it seemed underserved – at least on this scale (cinema, big budget, big actors, etc). We started Heart in Motion (HIM) Pictures so we could effectively create infrastructure and content for this genre. The next task was coming up with a project that would be unapologetically faith-based, but have a broad appeal. In developing ‘God Calling’ I thought about the reality of purpose in every person’s life. It made me think of the prophets in the Bible and what a modern day Elijah or Abraham would look like. What if she was a woman? What if she lived in Lagos? What if God used modern day technology to talk to her? And here we are. 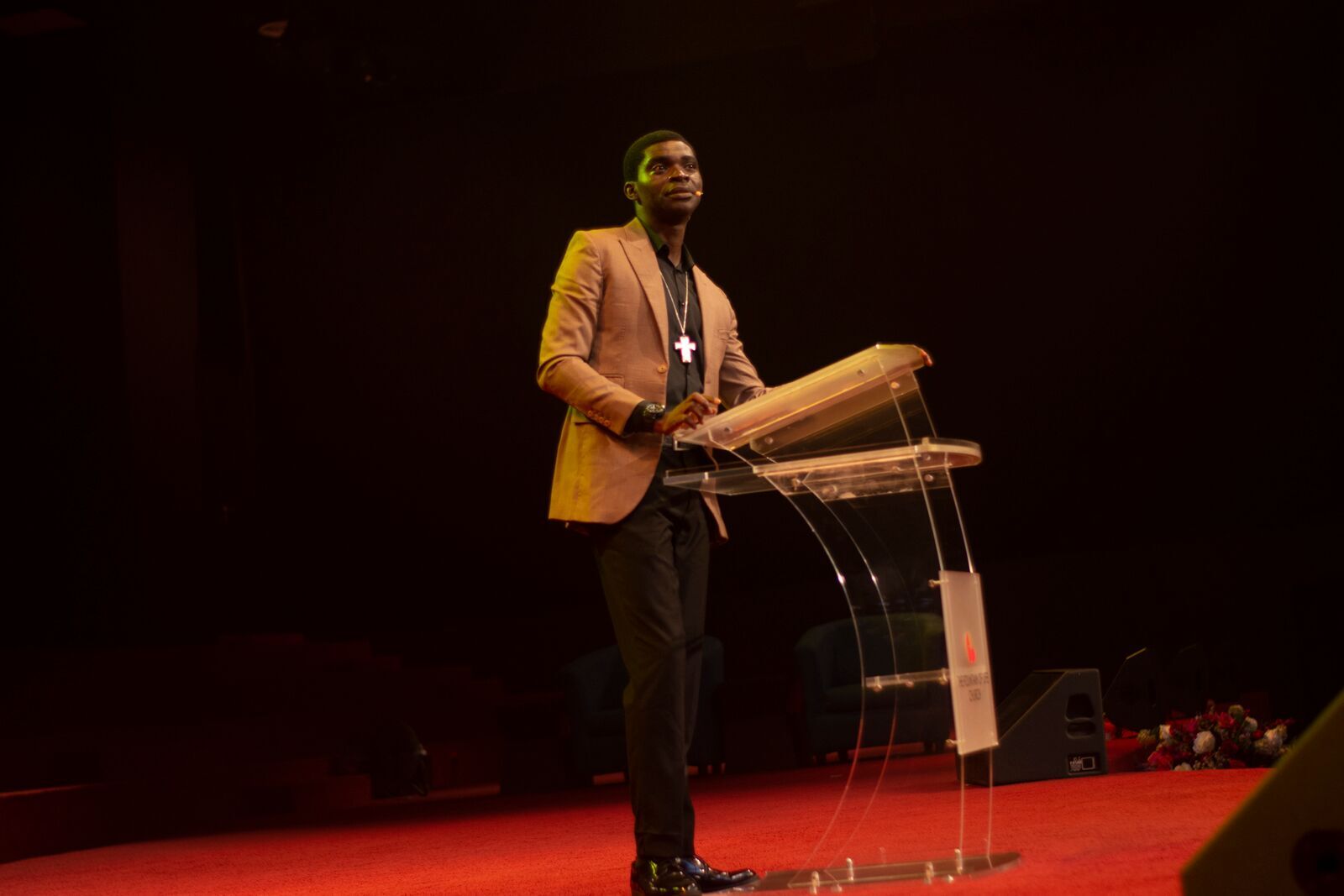 Seeing as some would say religion is quite pervasive in Nigerian Film, why is this movie different?

BB SASORE: People are passionate about religion, and Nigerians are no exception. You might argue that we are even more passionate. This means there is slight level of faith, inspiration, redemption, etc to our storytelling. We are a little less nuanced about good and evil, and we don’t love grey areas. There indeed are others who have made many faith-based films over the past few decades, and they have become an institution in the space. However, ‘God Calling’ is on a scale larger than any the industry has seen so far.

MOMO SPAINE: Nemsia is known for being able to deliver great quality on limited budgets so this might not be a fair comparison. I do believe it’s tough to deliver cinema quality films with less than N50 million in the current financial climate of the country. And that’s just for the product. For successful distribution and marketing, I would say an additional 15-20% of the cost of the production.

What does it take to get investors on a project such as this?

MOMO SPAINE: Getting investors on film projects, in general, can be tough. The industry is still in its early stages and distribution channels are still evolving. It takes tenacity. We are constantly knocking on doors, networking and selling the big picture. Nemsia has built a model which is being tested, and the recent interest in ‘God Calling’ as well as our other productions in the pipeline appears to be some validation for what we are doing.

As a company, our goal with every new project is to constantly move the needle in terms of quality, genre, and innovation. Investments are made when people buy into this vision. In addition, something about the subject matter in this film resonates with people. I think it softens hearts and people see the message as a direct call to them too.

How long did it take you to work on the script, get your cast and kick off production?

BB SASORE: Basically all of pre- production, between writing 5 drafts of the script, full casting, location scouting, VFX underwater & green-screen tests, etc all took just under four months. It was intensive, but Nemsia has a great team and we made it work. 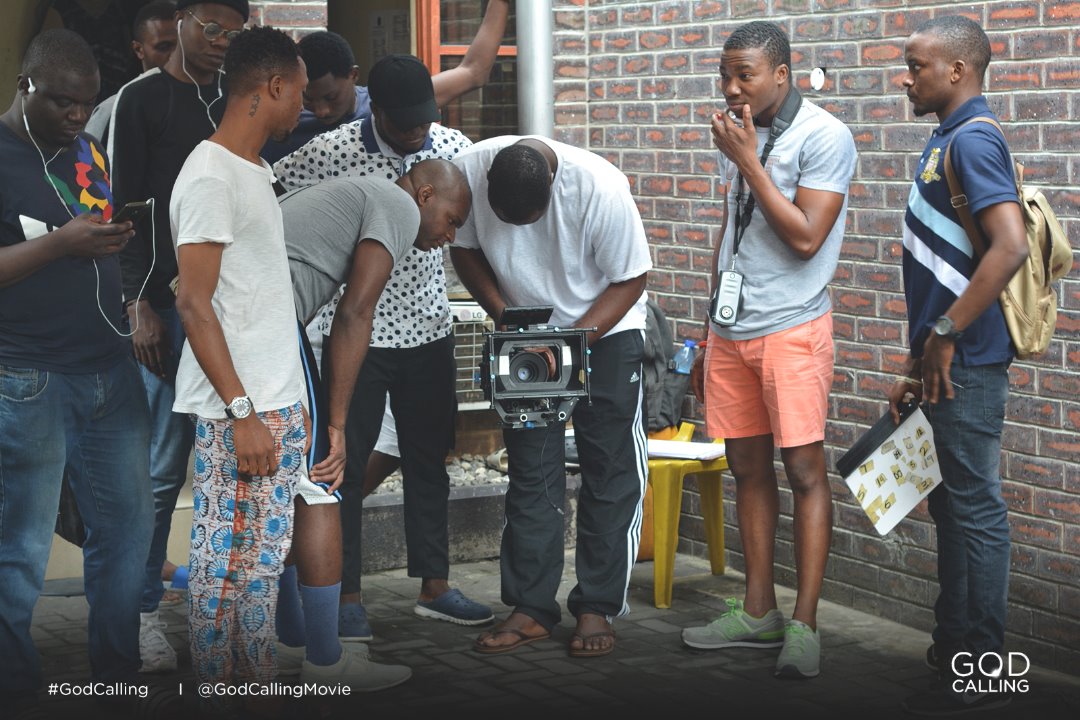 Tell us about the special effects in this movie, especially in relation to the bridge scene?

BB SASORE: Special effects (VFX) are an instrumental part of filmmaking today. When used properly stories can be more effectively told, and fantasy can be more elaborate. It is pretty expensive, and still a new talent in Nollywood, but we believe strongly in its ability to help shape our local stories for a global audience.

At Nemsia we are passionate about getting better with VFX and harnessing its impact when it’s used properly. ‘God Calling’ has a lot of VFX because it is important to move the story forward. In order to feel for someone who is attempting suicide on Third Mainland Bridge, you have to actually see and feel what it is like to attempt suicide on Third Mainland Bridge. That is only possible with VFX. This is why it is such a big part of the production.

What are the easiest ways to be efficient on the set of a movie production?

MOMO SPAINE: Delegation and a motivated work force. Film is a collaborative effort and is one of the few artistic pursuits that cannot be done alone. In my experience, it’s not always about skill. It’s about being part of a team and working collectively towards a goal. We do our best to bring together people we trust to run their departments, we harness all their best qualities, and utilize them in their areas of strength to deliver the best possible product.

Question: What challenges did you face and how did you work to get them sorted?

MOMO SPAINE: The challenges were endless! My method is that we do as much planning as possible in pre-production, (preparation phase in the weeks before we start filming) so that we can dedicate our time on set to putting out the inevitable fires that will occur. With production, most of the things that can go wrong, will. It’s about managing time, money and quick decision making. Sometimes this means compromise, but we’ve had some unexpectedly great outcomes that resulted from compromise.

What was it like working with veterans and upcoming acts on the set?

BB SASORE: Working with the veterans was completely unexplainable. You go in with expectations based on who you think they are and what they will bring to the set, and then you realize you are nowhere close. I was especially fortunate to have the most gracious actors on set, even with the biggest stars. RMD was always early, sometimes arriving even before crew. Onyeka Onwenu was the most pleasant woman ever and a true ‘mother hen’, she gave the entire crew gifts on her last day. Nkem Owoh is a special talent; he knew everyone’s lines and would give you variations of every choice in each scene. Tina Mba I have worked with on all my productions, and she’s an amazing actress. They all worked with me on their choices and took direction which was so inspiring. They were actually very vibrant, and as much fun as some of the younger actors! 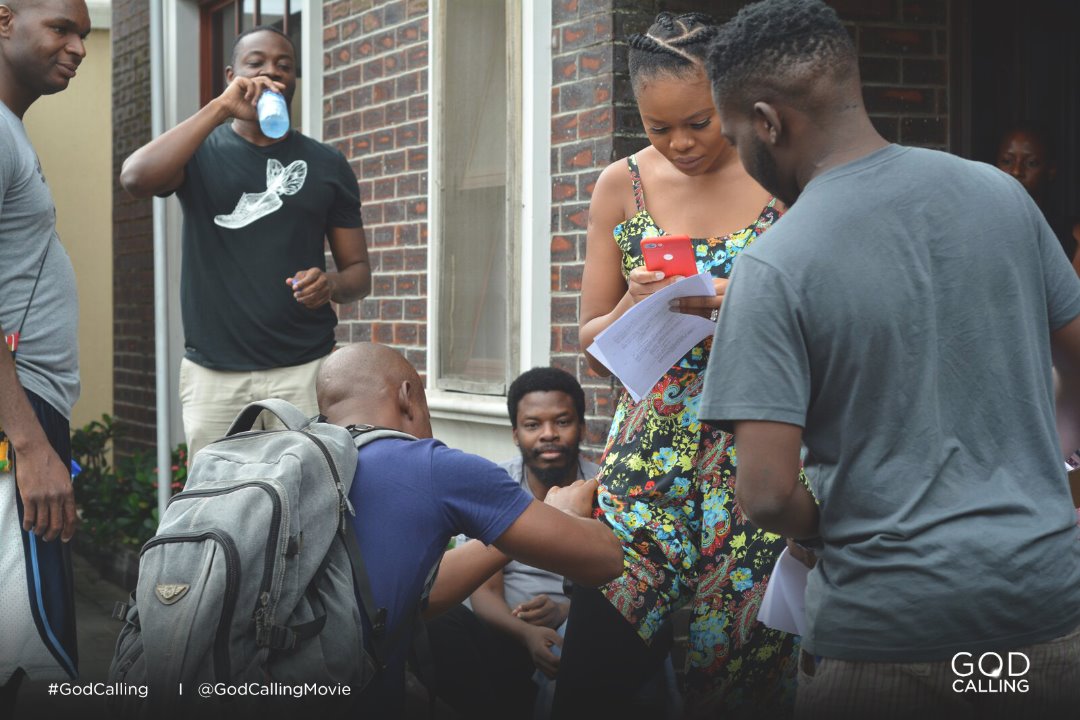 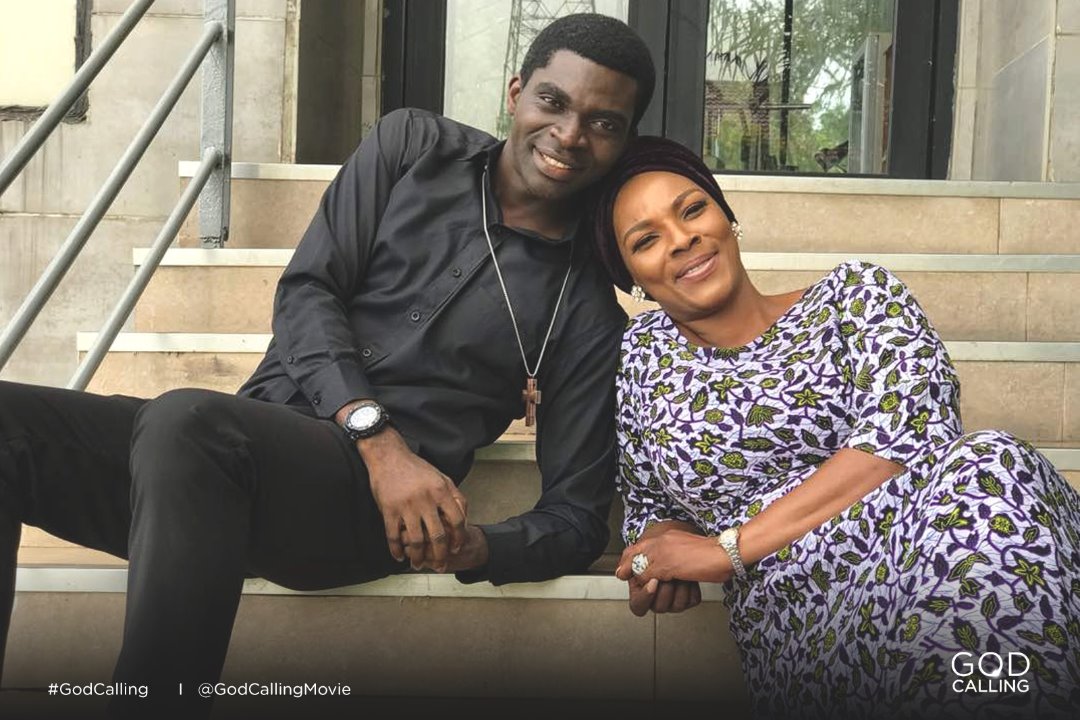 What should we take away from this movie?

MOMO SPAINE: I think everyone will take a different message from this. And that’s the goal. There are so many sensitive topics being dealt with in the film, but the one constant message is for people to recognize and pursue their purpose. And that applies to everyone, Christian or otherwise. I hope people are moved to make the tough (and sometimes unpopular) decisions in pursuit of what makes them happy and whole. 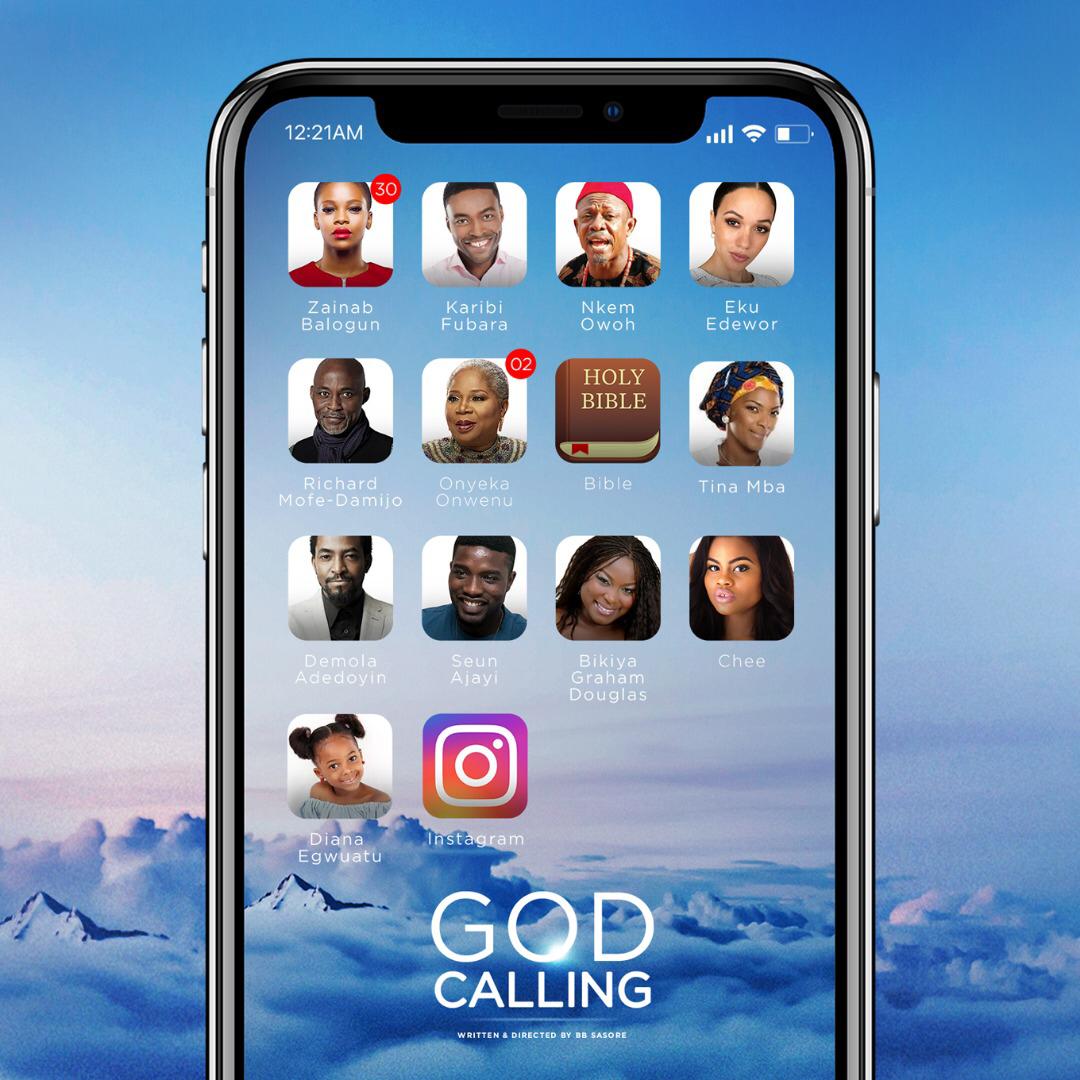